Vyner Park is a registered charity (No.1163835).  The land is owned by Newton on the Moor and Swarland Parish Council which leases it to the Vyner Park Charity.  A committee has been appointed made up of Parish Councillors (four) and co-opted members of the Parish (four); the committee is responsible for the running of the site, the sports facilities and the pavilion and for the maintenance and upkeep of the Park.  The Parish Council is the sole trustee of the Vyner Park Charity.  The committee meets regularly in ‘Nelson’s’  in the pavilion and the meetings are open to the public.

As at 30th June 2021, Vyner Park facilities are run on a ‘first come first served basis’ so no bookings are required. However, this is under review. Please phone 07775060430 to check the current situation.

Several people have asked for clarification about how the Nelsons café operates in relation to the Vyner Park Charity and in response the chairman wrote a short explanation for the parish newsletter in October 2017 which is shown below; 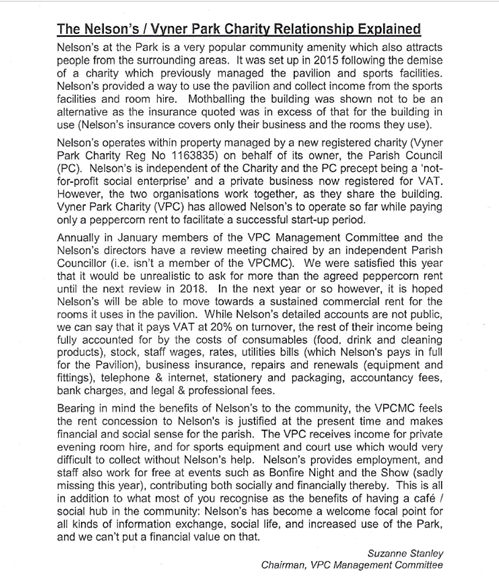